Wyrms are large, worm-looking creatures with scythe-like arms and glowing yellow eyes. They are encountered in Locations around the town, which include the Mines, Dust Bowl, and Mountain Pass.

Wyrms are aggressive and will attack the Player as soon as they are in sight. Wyrms will stay hidden under the ground, emerging and hurling Spit attacks at the Player or potentially slicing at them with their scythes when in range.

Melee Strike should speak for itself, but it mainly consists of up to three rapid strikes at a single target with its scythe-like arms.
Triple Strike is much like the base Melee Strike ability, but it strikes three times in rapid succession. The first is a right hook, the second a left; the third ending in a double strike from above.

Acid Spit is the Ranged Attack used by normal Wyrms. Acid Spit is an ability where it rears its head back, charges up and spews a large green ball toward a target, exploding upon impact and splashing a Damage-Over-Time (DOT) effect on all nearby creatures. Wyrms themselves are immune to Acid-based attacks, and therefore cannot damage neither themselves nor other nearby Wyrms with this attack. This ranged attack is easily evaded by running perpendicular to the path of the ball, but don't get caught off-guard!

Crystal Spit is the Ranged Attack used by Crystal Wyrms. Crystal Spit is an ability where it rears its head back, charges up and spews a small blue crystal toward a target, exploding upon impact and causing massive physical damage.

The spit attack can be consistently dodged by strafing to one side. It can also be avoided all together by getting into melee distance with the Wyrm , as they will only use their claw attack if their target is close enough. This can be blocked or parried, or the player can backstep and then move in close again before the next attack. The single claw swipe is telegraphed by a windup, making it easier to block with a weapon or shield. The triple swipe is more difficult to block, so it's often easier to back away from it.
Alternatively, the Bow and Arrow can be used to hit Wyrms from a distance or from cover, making it a slower but safer way of killing them.
Wyrms can pose a greater threat if there are many of them surrounding a player, or if the player is fighting another enemy. This is doubly true if the player gets hit, as the crippling effect will make it more difficult to dodge the spit attack. If a Wyrm appears while fighting a Turabada, kite the Turabada over to the Wyrm , as they will attack each other.
Note: Wyrms are also supposedly susceptible to blunt damage, so Hammers would be the best choice for melee warriors.

Crystal Wyrms will only spawn in the Crystal Caverns, while there are three places that Wyrms may spawn, which are the:

Wyrms occasionally drop green Leather Rolls for use at the Assembly Deck. 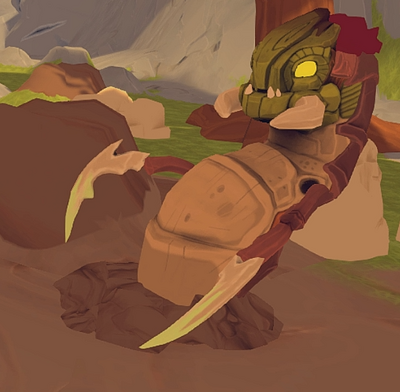 A simple Wyrm, these Wyrms will spawn anywhere past the first layer of the Mines, as well as various places outside the Town in the overworld. 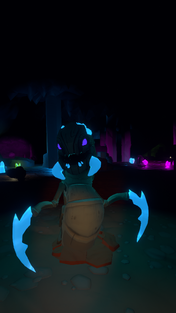