Primitive tools are the earliest possible tools to craft, requiring only a Stick and some basic resources that can be found lying on the ground.

Made by placing a Stone onto either slot of the stick. Placing a stone in both allows for a greater surface area for hammering. 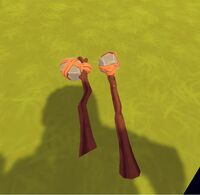 A piece of flint can be used as a chisel.

Made by placing a Flint on the end of a stick. Is a very simple weapon and cutting implement. 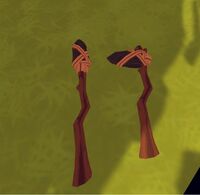 Made by placing a flint on the side of a stick. Can be used as a basic axe for woodcutting, pickaxe for mining, and weapon for hunting Spriggulls. Usually better to make a sp-axe or torch-axe , but works in a pinch.

Made by placing a flint into both slots of the stick. Good for chopping wood, mining basic ore, and as a weapon when nothing else is available as each strike has a chance of counting as 2 depending on the angle of attack. Using two simultaneous ground slams, assuming you have the skill, is a viable option in a tough situation.

Made by placing Dried Grass onto the end of a stick. Can be lit using flint or with other fire and will provide light.

Made by placing dry grass on the end and a flint on the side of a stick. The bread and butter for most players, the torch-axe allows for a basic resource-gathering tool, a makeshift weapon, and an easily lit light source all in one convenient inventory slot. Can be lit by striking the axe head with a stone or another flint.