Arrow Heads are used to create Arrows alongside Arrow Shafts and Fletchings.

Currently there are four types of Arrow Heads . Ones crafted using Blacksmith Moulds, Bone Arrow Heads created by breaking a bone with a weapon, Turabada Shards (introduced in 0.0.41.1 as a drop from the Turabada) and Crystal Shards from the blue crystals within the mine.

Arrow Heads can be made at the Blacksmith using their respective Blacksmith Mould. They require two of any Ingot, which will result in five Arrow Heads . 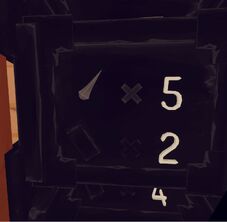 The Turabada Shard is a rare drop from a Turabada. When launched from a Bow it will explode on impact with an enemy, stunning the enemy momentarily.

Bone Arrow Heads are crafted by smashing a Bone with any tool or weapon, producing an Arrow Head.

Crystal Arrow Heads - Can be obtained by breaking Blue Crystals and collecting the Shards in the Mines. These Arrow Heads appear to deal damage equivalent to Iron Arrow Heads, but are slightly lighter.